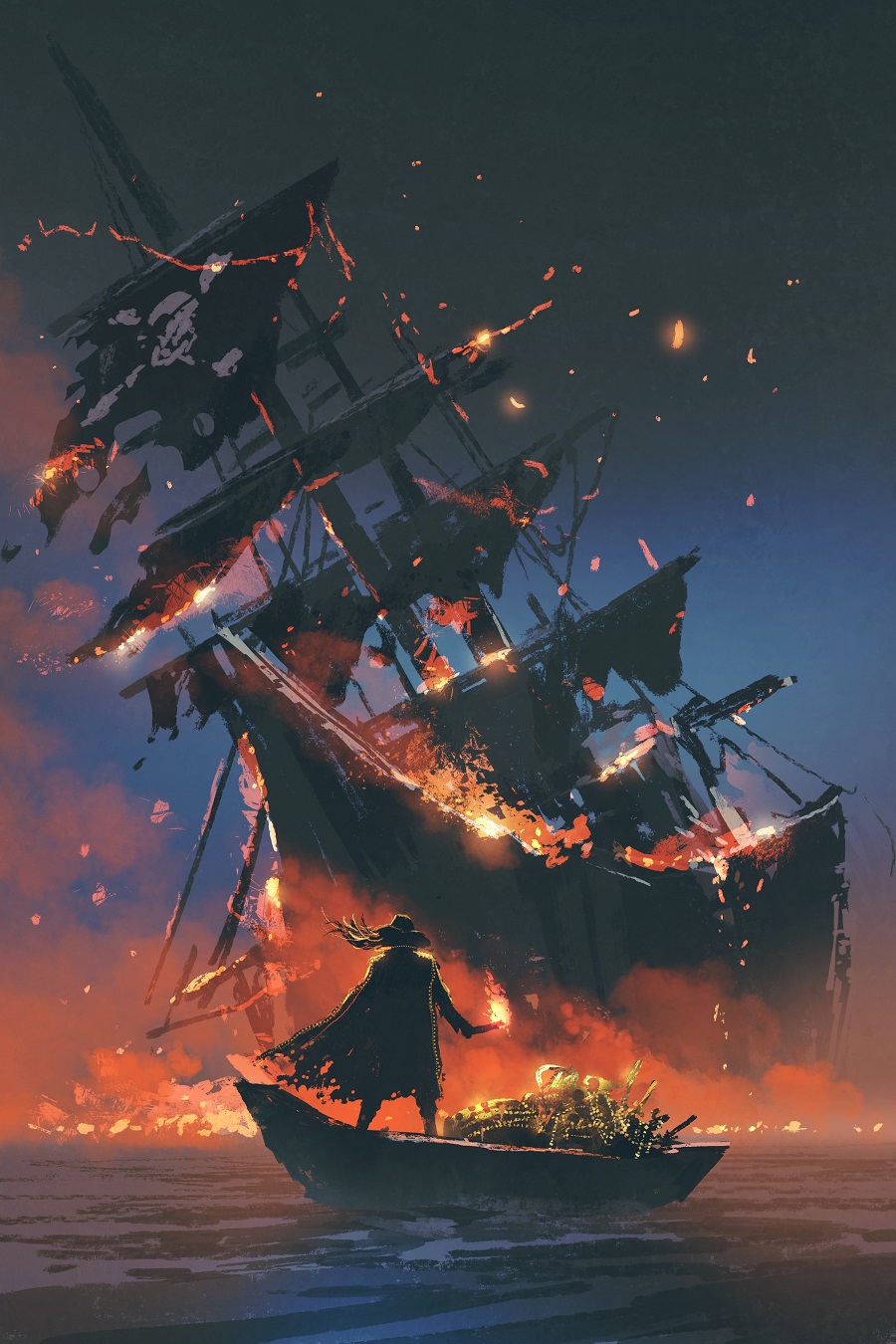 Ahem. Sorry there, matey. Got me pirate thumb caught in the door o’ me pirate chevy, and it hurts like–well, anyway, do pardon the screamin’.

This is the day, the great day when Pirates from all around the eight seas (oh, sure, YOU think there’s only seven seas, but what do YOU know of dread pirate secrets?)–gather to choose a new Pirate King!  And of course, they do it in the most piratical manner possible: by awardin’ the crown to the one who can tell the very best story!

What’s that ye say? That do be a milquetoast manner in which to elect a Lord of Buccaneers?  Did ye expect wars, backstabbin’, combat, treachery, and intrigue?

Don’t be ridiculous. We may be privateers, but we ain’t nitwits. We seen that whole “Throne Game” series, and we recognize that nobody in their right mind would want to go through all that stuff just to rule over a bunch of scurvy, nigh-unmanageable sea-miscreants. Let’s face it, the main job of a Pirate King is just singing about it a lot.  Ain’t worth gettin’ your wine poisoned over that. Waste o’ good wine.

SO VERY WELL! PIRATICAL STORYTELLING IT DO BE!  WE SHALL NOW TELL YOU THE RULES OF THIS WILD ADVENTURE IN CREATIVITY, VILLAINY, AND STORYDRINKING!

WHAT YOU WILL NEED TO PLAY THIS GAME

If ye do be wishin’ to make this a drinkin’ game, feel free to get yer Grog on. Always drink responsibly; and never, ever drink ‘n then pilot thy craft; that’s how we get Cursed Ships, dammit.

If this is a drinking game, we suggest that the winner of each round takes a drink.  (You COULD try having all the losing players take a drink instead, but thaaaaaaat will get ye a rather tipsy crew, rather quickly.  So be warned!)

Finally, if you’re doing a drinking game and have lots of clean glasses, you COULD pour each round’s drink into a clean glass, and hand the glass to the winning player.  The person with the most glasses of alcohol wins–in the game, and in life.  However:

WHAT THE HECK BE YE DOING WITH THAT MANY CLEAN GLASSES?  WHAT KIND OF PIRATE ARE YE, ANYWAY?

Slit all their throats and walk away with the treasure!

Wait, sorry, that’s a DIFFERENT game altogether.  What we meant was:

The object of PIRATE BRAG is to use the story elements, plus the Rumbustification of your choice, to tell the pirate story best-loved by the the Bartenders.  We recommend 3-5 rounds, unless ye be wantin’ a VERY long night.  ‘Tis up to the assemblage whether or not to put a time limit on each story; we suggest that ye do, lest some tales get COMPLETELY out of hand.

HOW TO WIN AT STORYDRINKING

Slit their throats and walk away wit–

Sorry. The ol’ Piratical instincts do be risin’ up of their own accord sometimes.

Each round, each Pirate will tell a story based on story elements drawn by the Bartenders, modified by the Rumbustification of that pirate’s choice.  After all stories are told, the Bartender(s) then decide which one they liked best.  The person with the winning story wins that rounds.  The person who wins the most rounds wins the game.

If there’s a tie for the final victory, feel free to declare both parties to be winners. Or have a tiebreaker round. Or let them fight to the death over a pit of fiery electro-piranhas. It’s up to you.

Sorry.  As we were saying–

2. Print (or write out) each of the SITUATIONS, COMPLICATIONS, and ABERRATIONS, and randomize them however you see fit.  We suggest drawing them out of a hat.

3. Do the same thing with the RUMBUSTIFICATIONS and put those into a DIFFERENT hat.

4. Swear a solemn oath NEVER to reveal any of the secrets which will be spoken tonight. Then totally lie and reveal ’em all.  BECAUSE: PIRATE.

5. Each player pulls three RUMBUSTICATIONS from the hat.  You can keep them secret, or not; up to you.

7. The Pirate whose turn it is shall select a RUMBUSTIFICATION to modify the flavor of the tale. Ye must then tell the story about how you, as a Pirate, encountered this situation and conquered it with Piratical derring-do!  LIE.  LIE A WHOLE LOT.  YOU’RE A PIRATE AND THIS IS A BRAGGING/DRINKING GAME.  LIE.

We recommend that Bartenders impose a time limit, such as three minutes, upon each story; but that’s up to you.  If you want to listen to Pirates ramble on forever about their unlikely adventures, that’s on you.

9. The remaining Pirates take turns–each using the SAME situation cards as the first player, and each pairing them with a RUMBUSTIFICATION from their own hand. (Or tentacle, or purse, or Bag of Holding, or wherever you store the RUMBUSTIFICATIONS you’ve drawn.)  So the Event cards stay the same, but the RUMBUSTIFICATION card (usually) changes.  Yes, you can use the same card as another player, if you have said card.  (But do tell a different story, or tell the same story a different way; otherwise, the bartenders will likely laugh at you.)

9. The Bartenders confer however they choose, and decide which story they like best.  They then announce the winner of that round, and give that person a TOKEN, or the SKULL OF AN ENEMY, or whatever else you use to keep score.  IF YOU CAN’T KEEP SCORE, IT’S NOT OUR FAULT.  HOW WILL YE EVER COUNT THY TREASURE IF YE CAN’T REMEMBER THY VICTORIES?

10.  Once each Pirate has told a story, the Bartenders then put aside the used-up SITUATIONS, COMPLICATIONS, and ABERRATIONS, and draw new ones.  And the next round begins.

11.  Keep going until you have played as many rounds as you chose, or the Kraken rises up out of the sea and consumes you all, whichever comes first.

12. Player who’s won the most rounds, wins.  WE REALLY SHOULDN’T NEED TO KEEP SAYING THAT, BUT WE’LL DO IT ANYWAY, JUST TO BE THOROUGH.

It’s a good idea to agree BEFORE you start on what you value most.  Just have a discussion about it.  Are we looking to tell the funniest stories?  The biggest lies?  The most creative uses of the cards?  Are we having a free-for-all, where the Bartender’s idea of “Best” is “Whatever most pleaseth the Bartender(s)”?

RECOMMENDATION: Our favorite rubrics are WELL-PLOTTED, WELL-TOLD, FUNNY, and REALLY, REALLY UNTRUE.  “Well-plotted” means the story makes sense (or makes glorious nonsense).  WELL-TOLD means told in an interesting style or way.  FUNNY is too subjective for us to define; figure that out yourselves.  And REALLY, REALLY UNTRUE means that we, personally, really admire those who can put forth tales which are GREAT BIG WACKY WHOPPERS, yet which also hold a narrative together.

Example of a boring untruth: “This coffee kept me awake much longer than coffee normally does.”  Example of interesting untruth: “THIS COFFEE REVIVED ME ANCIENT PIRATE BONES FROM THE DEAD, AND NEVER AGAIN WILL I KNOW THE JOYOUS OBLIVION OF SLEEP.”

This will eventually be a longer list.  Feel free to write your own.  But for now, we’ll just do ten of each.

COMPLICATIONS are the things that make your SITUATION more difficult.

Your only hope, O Player, may lie in…RUMBUSTIFICATIONS.