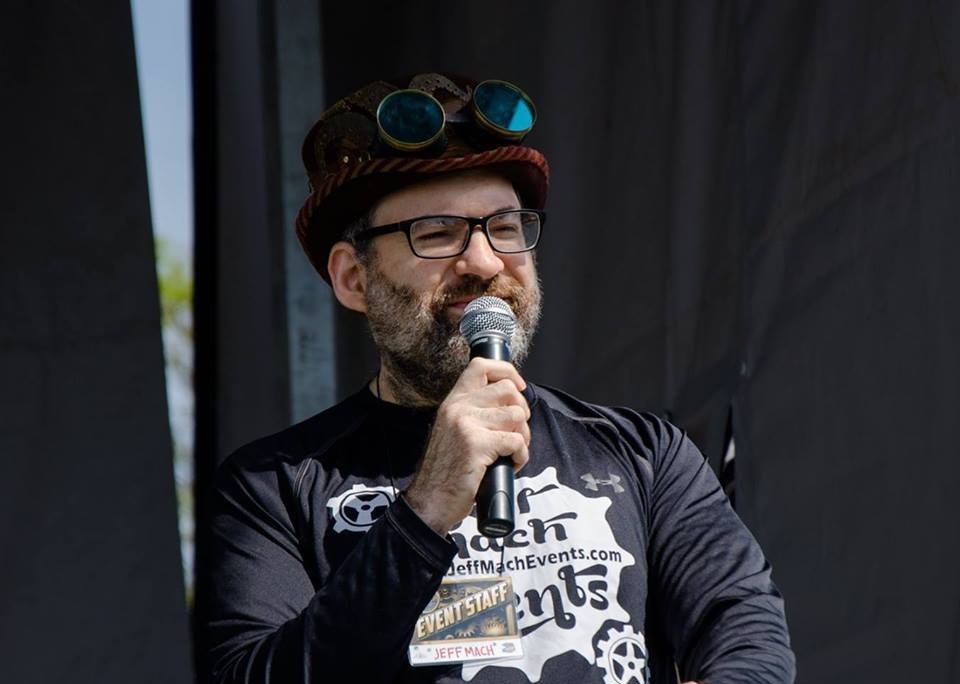 …the Amazon bestselling author of “There and NEVER, EVER BACK AGAIN: Diary of a Dark Lord“, a darkly-satirical, blackly humorous fantasy novel.  He’s also the monstrous mastermind behind Evil Expo, the convention for Villains, happening this January in Piscataway, New Jersey. Jeff’s been writing for over thirty years now, and still can’t  make it through an entire introductory paragraph about himself without remarking on how odd it is to discuss yourself in the third person.

Dark Lord Jeff Mach writes a lot of microfiction, short-short fiction, and brief poems which twist into strange little stories. He’s particularly fascinated by villains and villainy, monsters, dystopias, fairytales gone awry, and the entire world of things ordinarily considered to be Evil, Wicked, Iniquitous, or Simply Not Done. He particularly dislikes White Wizards, Witch-Hunters, Mobs, and anyone whose idea of a discussion is reaching for a pitchfork.

Wherever Creatures of Shadow gather, they speak of Jeff Mach. Granted, what they generally say is, “Who IS that guy, and why are we talking about him, anyway?” Jeff is the creator of the first Steampunk Rock Opera, “Absinthe Heroes”.  He’s been a practicing musician for over three decades years (although, to be honest, for the first decade, he was terrible), and has written a number of song cycles and musicals.  In 2017, he wrote “Beneath”, about the relationships between humans and monsters.

Jeff Mach invented and ran The Wicked Winter Renaissance Faire, The Geeky Kink Event, The Steampunk World’s Fair, The International Steampunk City, The Midsummer Magick Faire, The Anachronism NYC, Halloween in December, and numerous other events whose goals were to bring unusual people together.

According to the Lore, Jeff is forty-four years old and lives in Hackensack, New Jersey, with the company of his collection of several-thousand books, almost all purchased at bag sales for about a quarter a piece.  He loves giving used books a new home.  He prefers writing longhand, and then editing as he types things up.

If you have heard about me through the online mobbing attacks on my life, please see my statement on these allegations.

Some more about me:

Jeff Mach is the first viewer of the Dead Lights. By now they are his preferred evening channel.

Jeff Mach is definitely not here to steal the coconut.

Jeff Mach is the only person that true fear is afraid of.

Who decides hemlines are gonna go up this year, and down next year? Who controls the banks, the stock markets, the movie studios? Jeff Mach is with THEM. Same group, different department. Think of Jeff Mach as a middleman.
Jeff Mach is NOT THE ONE.
~Big Brother B2B5
Some may say he’s a dreamer, but he claims he’s not the only one.
He runs on sarcasm and spite, and if you tell anyone differently he will continue as he is, but with intensity.
If you believe in rebirth, he’s the “with feeling” in “once more, with feeling”
~Macabre Lunatic
Jeff Mach hails from an alternate dimension. It is a beautiful, utopian society where famine, poverty and crime have all been abolished. There hasn’t been a war since world war II, and the Earth has learned how to compromise. He left it, because it was not conducive for world domination.
~Chris Rushing

SOME REVIEWS OF JEFF’S BOOK, “THERE AND NEVER, EVER BACK AGAIN”:

Veronica Martinez
5.0 out of 5 stars
Not all Fantasy is cut and dry.
You know the players.
• A White Wizard, wise and caring.
• A Dark Lord, power mad and self-absorbed.
• A Chosen One, the only hope.But what if the Wizard is making it up as he goes along? And cares for himself most of all?The Lord is only interested in having one kingdom; and has some regard for the troops that will fight to protect that kingdom?

And the Chosen is not the Only, merely the Latest?

Welcome to Jeff Mach’s debut novel, There and Never, Ever Back Again: Diary of a Dark Lord. An old tale spun a new way.

With a looming invasion by the forces of Good, the Dark Lord fills the Chosen One in on the perpetual sarcasm of Elves, that Orcs are not so much ugly as asymmetrical, and that, perhaps, not all who dwell in the Darkness are there of their own volition.

There are no illusions of being a misunderstood ‘Hero’. The Dark Lord has worked and bled to claim that title of ‘Villain’. For the world needs villains, even if most won’t realize it.

Intercut are entries from the Chosen One’s own diary, who is learning there is much grey between Good and Evil. And how little a person is worth compared to the symbol others make of them.

If you like your fantasy neat and tidy, then I wish you a good day. But if you want to think a bit, see the view from the other side of the fence, and just maybe find the words you’ve been wishing someone would say…

Amazing book. Interesting theme. Strange at first, but then you get into it after the humor Grabs you in just the first few pages. It’s been years since I’ve been able to get into a tilted-universe, philosophically-based type of Sci-Fi like (as mentioned in previous reviews) Douglas Adams, etc. Originally I started reading it on Kindle – liked it so much I bought not only one hardcopy for myself, but a second hardcopy for my oldest kid, then the Audible audio book for myself. Definitely an interesting and unique (but in a good way) work. It’s one of those books where I’m sure as I step away from it or discuss it with others who have read it, that I will come to realizations that I missed the first time around and be drawn to read it again. That is the definition of a good book to me – one that draws you back again and again and again…

Theophanes Avery
5.0 out of 5 stars
A must have for anyone who loves over-the-top villains
What a delightful little romp into the dark side! Here we have a loquacious super villain pontificating their own existence while besmirching the good names of elves and unicorns. There’s a lot to love here – a playfulness of language, a sense of well timed whimsy, and at times glimmers of wise insight you wouldn’t really expect. It’s a bit light on plot but it was too funny to care that much. I mean parables from the dark side? Yes, please. I have already recommended it to other twisted minds.
Paula
5.0 out of 5 stars
Fantasy and the search for self-knowledge

There are many things to love about fantasy. But perhaps one of the greatest, that thing most unique to fantasy, is that it is the genre that puts us most directly in contact with our primal archetypes. There is good and evil. There are dragons and goblins and trolls and elves. Many aspects of our own selves are empowered, personified, and turned into conscious beings so that we may, in a sense, examine them. And then there is magic, our personification of human will itself, with internal rules that measure out what we believe to be our fundimental limitations as thinking beings.

Odd, then, that so little fantasy is actually reflective. We have the hero’s journey, sure, and we have the fireworks, and big battles between Dark and Light. But little room is given for deep human motivations to go along with the primal landscape. Our Good reasons are usually simplistic, and the reasoning for villians is… difficult truly to comprehend, except to put it in a box labelled “this here is eevillll!” and have them do ridiculously barbaric things to gain “power” or something.

Well, here we have something else. This book provides reflection in droves. And it will give you a whole different take on the forces of Darkness and the forces of Light. One that actually makes some kind of sense. One that doesn’t require all of the Dark forces to be stone cold psychopaths, bent only on murder and poor dental hygiene.

Sure, its written in a mostly light and comedic tone, but this is seriously thoughtful stuff. And if perhaps it makes us reconsider how we, who think of ourselves as the Good, create our own monsters…