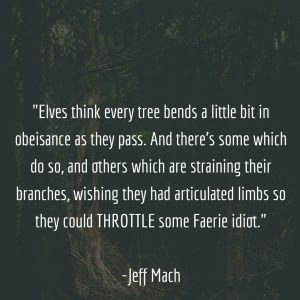 I spent some time in Faerieland once. I mean; it seemed I spent forever there, but that can’t be possible, because forever’s still happening, and I’m out here, and it’s cold. They don’t let you back in if they don’t like what you write about them, which is actually quite reasonable. I suppose I could return if I wanted to sing their praises; but I’d much, much rather sing their sins.

I was a misfit changeling, a bit less “stolen”, a bit more “temporarily shoplifted and returned when they realized I really didn’t fit”. Jokes on them—I don’t fit anywhere.

Elves suggest that they’re in harmony with nature. And it’s certainly true that there are some animals and some plants and some nights who know Elvish, and love to hear it spoken. There’s many a wolf which will arch its muscled back like a kitten in return for a few Faerie whispers and graceful hand patting its head. Then again, there’s some that know better. Why do Elves leave in houses of stone instead of inside of leafy woods? Because trees are old, and they speak to each other, and they remember.

Elves live long, as well, except when they disappear. And they often disappear. I don’t mean magically, mysteriously, fading out in one place and reappearing in the next. I mean that there are certain forests which will swallow an Elfling whole, and not every Elf avoids them because Elves don’t often tell the truth, even to each other.

They, themselves, think every tree bends a little bit in obeisance as they pass. And there’s some which do so, and others which are straining their branches, wishing they had articulated limbs so they could throttle some Faerie idiot.

Likewise, there are certain bright, sunlight places which are as hospitable to the Fae as the surface of the Moon is to humans. No; that not a good metaphor, come to think of it. Some humans have walked on the Moon.  Better, perhaps, to say that those particular clearings are, to the Fae, about as habitable as the bottom of the ocean is to humans if the bottom of the ocean were also somehow on fire and being sucked through a black hole. By which I’m trying to say: I hate Elves, but there are forces on this Earth which really, really, really hate Elves.

And my general guess is, those forces are other Elves.

Elves are essentially immortal; Elves are universally beautiful; Elves are Magic, and Magic (I will remind you) always, always has its costs.

There is a screaming voice inside of every Faerie, and it is the voice of that Faerie, and only the screams of another Faerie will, sometimes, briefly, drown it out.

Sometime, I’ll tell you the story of how I left Faerieland. Puck’s involved. Puck’s always involved. There’s only two good things that ever came out of Faeriland; Puck’s one of them.

And I’ll tell you right now: the other one ain’t me.

“There and NEVER, EVER BACK AGAIN: Diary of a Dark Lord” is the first novel by Jeff Mach, playwright, event creator, and certified Villain. If you'd like to meet Jeff Mach, or if you're simply a Monstrous Creature yourself, you should come to Jeff's new event, Evil Expo.