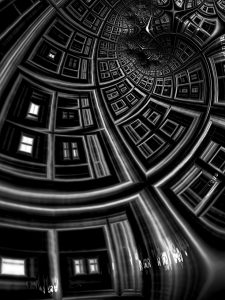 There are machines and then there are machines. You did not need to see this thing to know it was a monster, you could feel it–an acrid parietal aftertaste of electrons in displeasant union, a harsh undertone that seemed to be a stink of the mind, the hungrily pervasive odor of Newtonic Stew. Someone had boiled and overboiled and boiled again a piebald mix of mathematical certainties and rabbit bones and mutteringly ugly logic; someone had thrown up a lump of iron and circuitry and Prometheus-bait and called it a tool. No, you did not need to see this thing. You’d know its shape in murkiest of unlit rooms, a hydra of cable and steel and diode—

(except that wouldn’t happen; you’d never, never catch yourself sharing darkness with this thing, not for fame nor cash nor love. Not this creature, by Lud; no, not this beast.)

And these are the things about the machine that you’d notice, even if you didn’t know its purpose, its meaning, method, and design. You might have guessed the thing merely dangerous, volatile, explosive, an Act of Deus Homo patiently hoarding energy for some savage eruption; a steel-bound goblin, bloodthirsty for believable accident. But such thoughts, while not untrue, hardly did the thing justice. Does extinction en masse interest you, Pangaean deconstruction, upheavals in the Atlantean sense? Then perk up; this machine could Cuisinart a universe. In fact, quite possibly, it would.

A galactic court would have lambasted the two hundred or so humans in the gallery; would have flung them into the Granola Pits of Kukimlima at the mere criminal negligence of allowing such a device to be built, much less letting some idiot near the switches. Two hundred of them and one of him; did not a single being have the courage to stop madness at its root?

The answer is: madness, yes. But Doctor Mirabeau? Never.

Doctor Mirabeau: a man beyond the skills of any reasonable exorcist, an elemental force, a rationalist’s rationalist, scientist without peer. Mutter a word of discontent and he has you by the neck, has hurled you into the wall and released his mouth. “Fear? You would trade Discovery for a few years of mere life? A scientist must deal with the Truth–the Truth, I tell you! no matter how painful or difficult such truths might be. There is a vast spiderweb of Totality out there! You desire to put your puny being in the way of that knowledge, without which we are but pinpricks in the fabric of macrocosm? You invertebrate mayfly, remove yourself from my sight before I remove you permanently from your vaguely distasteful illusions of existence!”

Doctor Mirabeau, man of vision, ridden at nights by the hooknailed hag of Chaos, enthralled and appalled by Her awesome beauty. Pragmatist supreme, knight of the test tube, avenging Confucianist and devout denier of all things frivolous and funky. He had no time for whimsy, any more than a battle-caught soldier has time to play tennis and flutter amidst the daffodils. He was master of a dozen lifeworks, a monolith of academe, an ubermensch’s ubermensch. And tonight was the zenith, the very pinnacle of his career.

And, naturally, no mere experiment would suffice to culminate this man’s calling, no theorum or law could satiate that stormtrooper of natural study. No, Mirabeu’s Test would be conclusive, definitive, and very, very final. Too final, perhaps, for the hapless galactic core he inhabited. Oh, yes, tonight might well be the night of anti-Creation, the grand unmaking, the Entropy To End All Entropy. Tonight they danced a tango with apocalypse, and not one of those easy tangos, either, but the kind that has that strange dip-thing where you think they’re going to fall over and then somehow, somebody gets a rose stuck in their teeth.

For tonight the good doctor strove to understand nothing less than—we tremble—reality, Itself.

Yes, reality. Is that not, he’d demand, the heart of science –comprehending the essence of things as they really are? Most often–nigh invariably–we give up on the idea. There are too many variables, too many grey places, too much in the way. And Mirabeau could not stand this. His were eyes incapable of tolerating the rheum of limitations, hands impotent to touch the world without, of their own will, seeking to test, analyze, meld and demendicate.

And so tonight might, indeed, prove to be the end of all things. What if, as they say, perception is everything? Remove the perception, and you have…nothing at all. And we all fall into the void.

Or what if, in truth, nothing is real and all is imaginary? And none of us ever existed?

How harsh is “harsh reality”, anyway?

With these spectres in the background, you’d think the doctor might have been, if not concerned, at least considerate; you’d figure he’d have stomped about with reassuring statistics or hopeful prognostications. But no. Such spurious psychological complications had no place in Mirabeau’s world. He didn’t even have the courtesy of offering a speech, a statement, a few tasteful words or a tranquilizingly lengthy address. As the collective uneasy stare of too many scientists failed to burn a hole through the Machine’s ominous grillwork, Mirabeau stalked to the back to the room and did something to a pair of knobs.

VOOMP! VOOMP! VOOMP! cried the Machine. Smoke spat through a dozen steel orifices. Hammering shook the hall and explosions rocked the walls, made plummeting glass out of windowpanes, threw fixtures into wreckage and tenscore scientists into a single amorphous mass of terrified potential riot. The Machine’s wails played Ripper in a hundred minds, its pain tangible and kinetic. The thing smoldered, hissed, belched Magog, swore in the language of constructs, dripped bits of itself everywhere, hunkering down hard against the building’s roots, preparing for one final, Pyrrhic act of war.

And the Universe went out.

And was switched back on by the concerted force of imaginations without number, who were damn sure that they didn’t want to go away until they’d finished at least one. More. Daydream. Maybe two. Maybe a hundred….

And the scientists flew about on roaming q-waves and danced to the polyrhythms of bandersnatch sighs. Sentient calculators sculpted tastefully from red cabbage ran about, reciting Goethe. Bits of antimatter floated like disturbing raindrops, encased in energy fields, bearing little tags that said compliments of dimension Zorp. Pigs soared, fairies eloped with molars, mountains walked and oceans did the Tennessee Waltz. Elder Gods and invisible yodelers dueled over plastic bags full of leprechaun gold and Daleks were everywhere, being led around on chains by little men with cable receptors in their skulls.

“My God,” whispered a scientist, “Reality is…science fiction.” She turned to Mirabeau to offer consolations.

But the Rationalist was gone.

On the tropical glory world of Procyon VI, in an unmapped region, atop an unanchored island that surfed across a particularly perfect sea, under the very shadiest palm frond, a curious figure is just putting the last hen’s tooth into something which very much resembles a slice of biolectrical lasagna with lawnmower attachments.

He fiddles with the Toltec receptor for a moment, then steps back and adjusts the glorple. He gives the thing a good whack on its eighteenth nostril (he’d wired its pain circuits to a piece of key lime pie, so it registered all pain as a sharp intake of whipped cream–no harm done)–and the row of balls began moving along the Mobius strip. He watched. Yes–the unicorn spit completely negated the coefficient of friction, and the balrog breath set up a limited-range field of antigravitic adhesion. The balls rolled; they bounced off each other and rolled again, bounced and rolled, bounced and rolled, and would do so forever. He’d done it. Perpetual motion. Abs-o-lutely impossible.

He turned around to deafening applause. The nymph-beings of Procyon VI were the most brilliant astrophysicists anywhere. They were also, when the mood struck then, unbelievably sensual, spectacular chefs, and some of the best damn people in the galaxy with whom to get a beer or ten. The man stared off into the orange-lavender pinstriped sunset for a moment, marveling as the rising moon dripped Havarti cheese into a sea of sangria. He looked once more at his invention which, in any sensible universe, would have been quite absurd, due to the Second Law of Thermodynamics.

“Screw the Second Law of Thermodynamics,” he muttered, and then could say no more, because his mouth was completely covered by the first in a long, long series of lotus-blossom kisses.